Inspired by a request from friends recently turned vegan, I decided to combined some of my favorite “healthy” items including brown rice, garlic, swiss chard, and the amazing Italian sausages from Seattle’s very own Field Roast. (source: Costco, Whole Foods, QFC)

This dish is approved by several local carnivores, mostly due to the nutty texture of the rice, sweetness from the chard and softened roasted garlic, and realization that meat substitutes only disappoint if you expect them to taste 100% like meat.

Step 1: Pan Roast Garlic & Chard Stalks
Dice the garlic and toss it into a pan with olive oil, leaving it on low while you prep the chard stalks. Separate the ruby red stalks (photo right) from the leafy greens. (Instructions available in this video.) Dice the stalks and toss them into the pan with the garlic. Leave at a low temperature, stirring occasionally for ~15 minutes. 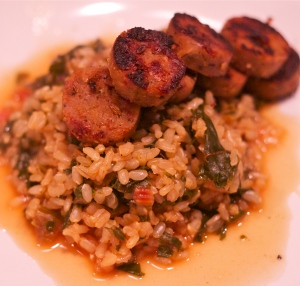 Step 5: Combine & Serve
The photo (left) has the rice & chard mixed with the seared sausage on top. However, you can combine all or none of the ingredients as you like.

If you find that you really dislike fake meat and have given up on trying veganism, substitute with real sausage or complain to the gorilla in this post.